It Began in Paradox… 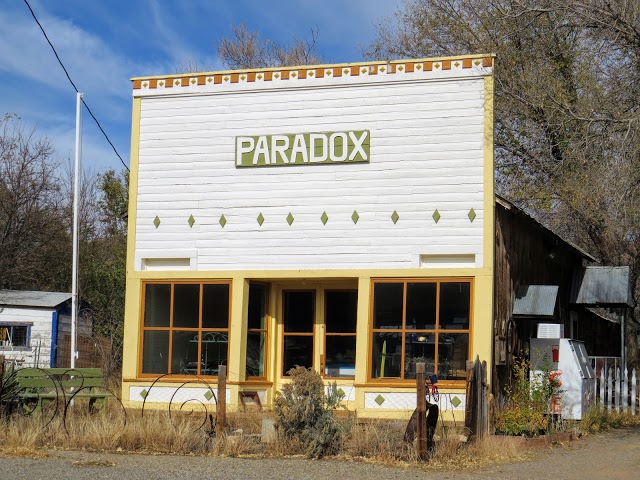 It began in Paradox in 1953. Two of my wife’s uncles attended what they would call, “a holy roller service”, something their father had warned them to stay away from. It was there at a revival service that they gave their hearts to the Lord. It would be the beginning of a revival within the Williams, Moore, and Smith families who would unite with the Gripe and Wagner families . This union of families would birth countless missionaries, evangelists, preachers, pastors, youth workers, music ministers, and Sunday school workers all over the world.  It all began in Paradox for the one special and beautiful woman; my bride, the mother of my children,  co-pastor and soon be grandma and, Nita K.

If you’re not familiar with it, Paradox is a small town in rural western Colorado. As you may know, the word Paradox is a statement or proposition that, despite sound reasoning from acceptable premises, leads to a conclusion that seems senseless, logically unacceptable, or self-contradictory. Hence the town of Paradox derived its name because of the Delores River, which runs across the valley in which the town is located rather than running down the length of it.

I was told the story about a preacher named Earl Johnson and his wife, who in 1953 were traveling from Salt Lake City to Oklahoma. As they came to La Sal Junction on the border of Utah and Colorado, they heard the Lord speak to them, telling them to turn. They were no longer to go to Oklahoma. Though they had enough money to get to Oklahoma, they knew that if they wavered from their path they would not have the money to get to their destination. But Brother Johnson knew the voice of the Lord and so despite sound reasoning, they turned down a road that was in those days very difficult to travel. I have been told that in the winter time it was largely unpassable. Deep ruts, steep inclines, large rocks and perilous drop offs.  Yet they proceeded to drive down a dirt road that brought him to a place called Paradox.

When Brother Johnson arrived in Paradox their funds were low. No longer having the means to make it to Oklahoma and having no place to stay in Paradox, Brother Johnson was unsure of what they were supposed to do in the tiny little town. God had simply told him to turn and that is what he did.

He walked into the general store in Paradox and while he was looking around he overheard a conversation between a woman named Mrs. Columbo and the store keeper. She was asking him if he knew of anybody that could build her a house. Brother Johnson spoke up and said “I’m a carpenter and I can build you a house”.  He introduces himself to Mrs. Colombo and they exchanged pleasantries. She decided to hire him and he was to report to her house the next morning. I am reminded of the great woman in 2 Kings 4, who along with her husband, the Lord prepared to take care of the prophet Elisha. Every time he was in the area this great woman and her husband fed Elisha and gave him lodging. Mrs. Colombo, like the woman of 2 Kings 4, would provide a house for Brother Johnson and money to live on. I am told she advanced him 50 dollars and a completely furnished house. God is faithful.

Sometime during that year Brother Johnson would begin holding services in the old school house. It was during one of those, “holy roller services” that Uncle Jim age 19 and Uncle William age 16, submitted their lives to the Lord. Jim and William were the only ones to show up for service that night.  Uncle Mike and  my wife’s father Ira Smith would soon follow.

Many times, in ministry the path that we are called to seems senseless, logically unacceptable, and beyond sound reasoning from acceptable premises. But Hebrews 11:7 reminds us that even though it was logically unacceptable and even though it went beyond sound reasoning, Noah built an ark. Verse 8 tells us that Abraham pursued a path that to some would seem senseless, not knowing where he was going, and at one point willing to offer his son Isaac as a sacrifice. Each one of these examples seem senseless and logically unacceptable, but the decision to obey the voice of the Lord resulted in God’s favor and His divine purpose for their lives being fulfilled.

Pastors, thank you for your faithfulness to the paradox that you have been called to. Sometimes the call on your life seems beyond sound reasoning, logically unacceptable and some might even say senseless. Brother Johnson’s decision to turn and go to Paradox to some was a paradox, made no sense, defied logic but it was not a paradox to God.  You might feel like two are not worth it, but for those two men it was a matter of life and death. The call of God is the greatest calling that there is. He is more than faithful in whatever paradox you have been called to.